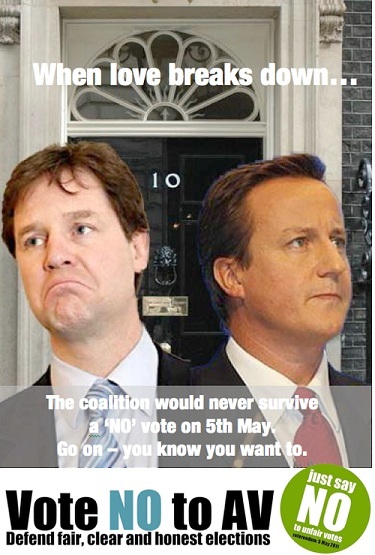 Who will win the AV referendum?

News broke overnight that Matthew Elliott, founder of the Taxpayers’ Alliance and BigBrotherWatch, will be leading the ‘No 2 AV’ campaign in the forthcoming referendum on electoral reform.

Guido has linked to the a betting exchange suggesting a ‘Yes’ winÂ at time of writing. However, if you wander over to Ladbrokes, you’ll find the ‘No’ priced at 2/5 and the ‘Yes’ at 7/4 (again at time of writing). Now it doesn’t take a punter like OGH to spot a little arbitrage, but I’m actually more interested in the reason behind the disparity. Someone always knows, someone always tells, someone always bets – why are these prices so different, and who has driven it?

My assessment of this contest is that the ‘No’ vote should be the favourite. The Conservative party is united against AV, some Labour greybeards and the unions oppose it (though won’t spend too much fighting it), opportunists on Right and Left hope that a No vote might break up the coalition.

With the disclaimer that Matthew Elliott is a good friend of mine, I also rate him highly as an effective campaigner, and if his side (as it seems) combines all the requested support from the Tories (money, institutional support, footsoldiers etc) without actually being an official Conservative party campaign (ie, not a referendum on the government) then they should do well.

On the other side of the fence, it seems that the Yes campaign might be run directly out of Cowley Street (interesting but unconfirmed rumours about staffing to follow!), which might well make the AV vote a referendum on the Lib Dems in government. The proximity of the LibDems to the Yes campaign could be a great strength, if the whole party is mobilised (which I think would have been automatic if we were voting on AV+ or STV), but if support for plain old AV is tepid within their ranks, then association with one party, when the No campaign is a combination of Tories and Labour, could make it much harder for the Yes campaign to win.

For my money, the Liberal Democrat conference will be key. Nick Clegg this week sounded like he was bracing the party for the continuence of the coalition if/when the referendum on electoral reform was lost. If he wants to win it, and avoid the threat of a serious split in his party, then enthusing the LibDem base at conference could be all important.

I think the Ladbrokes price is probably about right, but suspect the market isn’t especially liquid at this stage. Also beware that, in an illiquid market, those with deeper pockets have disproportionate weight. In a campaign that no major party will want to spend too much of its funds on winning, rich philanthropists might have as great an impact on the campaign as on the betting markets following it.