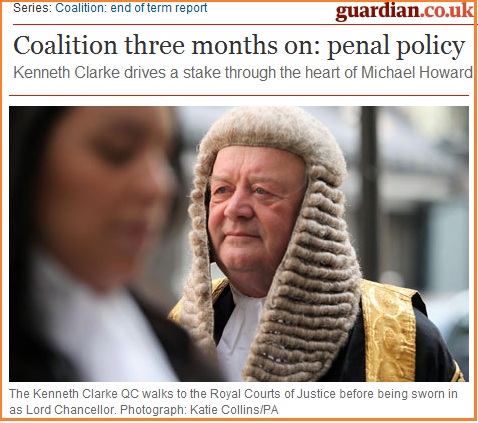 Has Clarke become the Lib Dems’ most popular Tory?

On the afternoon of Monday September 20th Nick Clegg will have to make the speech of his life to his party gathering in Liverpool in what looks set to be THE event of the conference season. For the reaction of his audience could determine how long the coalition can survive and with it his own future.

The stakes are high and Clegg has to be able to demonstrate that his party is getting a real return for all it has invested in the controversial deal and that the government is being influenced by liberal values.

There is one area which hasn’t been given much attention but which could could provide good ammunition for Clegg that could resonate with his party – penal policy.

For after two decades in which the polices of home and justice secretaries such as Michael Howard, Jack Straw, David Blunkett, John Reid and Jacqui Smith have repulsed many Lib Dems there is now someone in the job who is pursuing a programme that has a lot of appeal to them – Ken Clarke.

As the Guardian’s, Anushka Asthana, observed in a recent feature “some of the most liberal ideas in the first few months of the coalition have come from the Ministry of Justice – with its Tory secretary of state.”

She noted: “Ken Clarke triggered a furious reaction from some Tory MPs when he argued for radical prison reform that would see less emphasis on locking people up and more on rehabilitation. He indicated that there would be an overhaul of sentencing policy with more alternatives to short sentences and plans to divert the mentally ill and those addicted to drugs into secure treatment centres. He argued it was “virtually impossible” to rehabilitate someone during a jail term of less than 12 months, adding: “Too often prison has proved a costly and ineffectual approach that fails to turn criminals into law-abiding citizens. In our worst prisons it produces tougher criminals.” Later, he claimed rising prison numbers were not linked to falling crime.”

What a rejection of the policies of the last Tory to be in charge – Michael Howard, him of “prison works” fame. You can bet that Clegg will rehearse all of this in his conference speech and that it will go down very well.

Clarke’s liberal (with a small L) regime has not won him friends on the Tory right but then the old bruiser is never one to worry about attacks from that quarter. In fact in the Mail of Sunday at the weekend James Forsyth suggested that Cameron is caused more trouble by Ken Clarke than anyone else.

So what might be an answer to some of Clegg’s problems is not making life easy for Cameron – but hey that’s coalition government for you.