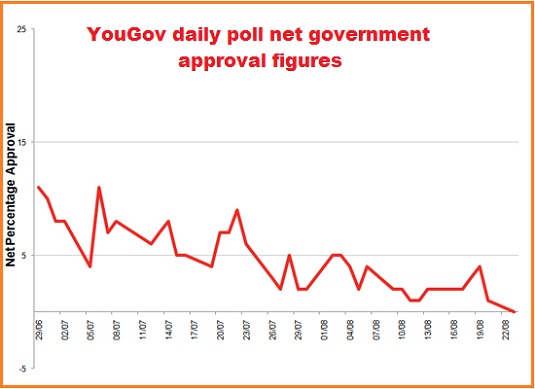 The big polling news in the past twenty-fours hours has been the move to a zero rating, for the first time since the election, in the YouGov government approval rating.

The question is a straightforward “Do you approve or disapprove of the government’s record to date?” The latest numbers were 40% approve and 40% disapprove.

These figures started falling back for the coalition at the time of the budget and have edged downwards ever since.

A big problem with comparative figures is that the online pollster implemented a comprehensive change of weightings at exactly the same time which had a marked impact on its voting intention numbers.

But even with that there is no doubt about the downwards in the approval ratings which no look set to negative in the next week or so.

The only other pollster that asks government approval questions in a standard form every month, Ipsos-MORI, has also been showing a decline – the latest showed a three point positive.

I think that going negative, particularly if it is backed up by MORI which has an unchanged methodology, will be a significant moment.