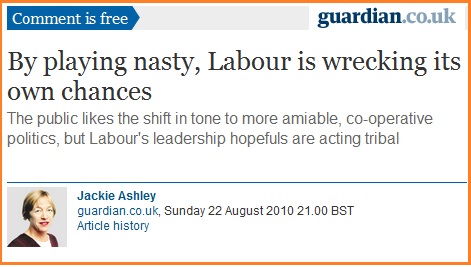 Could Labour be wrong by “playing nasty”?

One of most provocative “Monday columns” in the the papers this morning is from Jacky Ashley in the Guardian in which she takes Labour to task for not reading reading the public mood right.

She argues: “Labour is playing bad politics. The leadership campaign is turning into a tin-ear, foot-in-mouth competition about who can be nastiest to the Liberal Democrats. As candidates desperately try to prove themselves more true Labour, more tribal than the next guy, they are in danger of missing the big picture about our changing politics. They could end up wrecking their party’s position for the next generation, which is their own.

Part of this is about an underestimated and under-discussed quality in politics: tone. The biggest tone change in politics has been the transition from the raw warfare of the latter days of New Labour towards the apparently collegiate and good-humoured attitude of the coalition. It’s true this is already fraying at the edges….but the crucial thing is that the public seem to like the spirit of co-operation.

If Labour goes into all-out war against Clegg and colleagues, betting on the Lib Dems breaking up, and loses the bet, they may well find British politics has realigned very differently. Put it another way: the behaviour of Labour now may decide whether its future is as an opposition party or the next government.”

I am sure that Jackie right but she is also unrealistic. There’s a battle going on out there to become leader of the party and the contenders’ rhetoric has to resonate with those who’ll be receiving their ballot papers in less than a fortnight.

Those who’ll be voting are not the public at large but signed up members of the Labour tribe – and the best way of appealing to them, surely, is to be tribal.

But one party acting in a fiercely tribal manner is leading to another one, the Lib Dems, doing the same. My reading is that the Labour onslaught is bringing the LDs closer together. It is very much like how Labour reacted when Gordon Brown was under sustained attack. The party gathered round to support the leader.