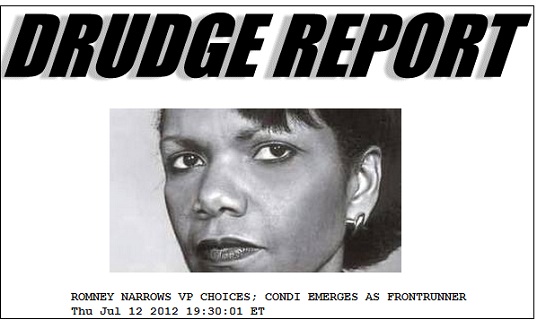 On Sunday, just five days ago, I posted here under the headline “Why Iâ€™m betting on Condi to be Mittâ€™s running mate”. I suggested that the 40/1 then available against the former US secretary of state, Condoleezza Rice, as Romney’s running mate was a good bet.

Overnight the big political news in the US is that the Drudge Report is saying that Condi is the front-runner. This is what he’s reporting:-

Late Thursday evening, Mitt Romney’s presidential campaign launched a new fundraising drive, ‘Meet The VP’ — just as Romney himself has narrowed the field of candidates to a handful, sources reveal.

And a surprise name is now near the top of the list: Former Secretary of State Condoleezza Rice!

The timing of the announcement is now set for ‘coming weeks’.”