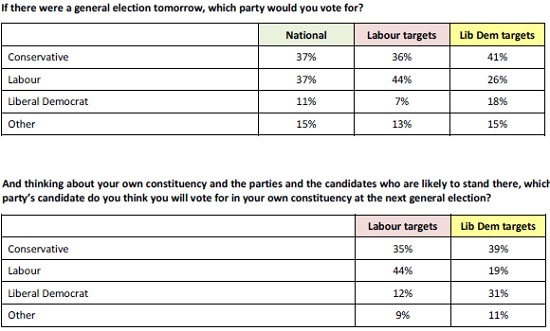 Could this impact on Tory hopes?

(This is the first of a series of articles looking at the Tory chances of winning a majority. This first one looks at tactical voting)

One of the big challenges that the blues have had to deal with in recent general elections has been anti-Tory tactical voting in key seats. What happens is that voters choose the contender in their own constituency who seems most likely to beat the Tory. Surprisingly little there have been few examples of anti-Labour tactical voting.

Back in September 2011 Michael Ashcroft commissioned Populus to carry out a massive phone poll involving 13,000 interviewees in 41 Tory-held marginal seats.

In 8 them the LDs were in second place. The rest were Tory spats with Labour.

The key numbers are in the tables reproduced above and the message is not very promising for the Tories, quite encouraging for Labour and even more so, in the circumstances, for the Lib Dems.

Since then, of course, the national polling picture has got much better for Labour, is about the same for the Lib Dems and has got worse for the Tories.

On voting intention two questions were asked – a standard national one and a second which sought to get respondees’ views on what they would do in their own constituencies.

The figure that stands out is the uplift from 18% to 31% in the Lib Dem share in CON-LD marginals when the constituency point was pressed. More than half the increase comes from Labour voters who, seemingly, are ready to switch to stop the Tories.

Given that these are currently Tory-held seats that doesn’t look promising in either category. Labour was well ahead in the seats being defended by the blue team. It also sent out a message about those key Lib Dem seats that the blues have their eyes on.

It would be great if we had some up to date polling but we don’t but it’s hard to envisage that things have got better for the blues.