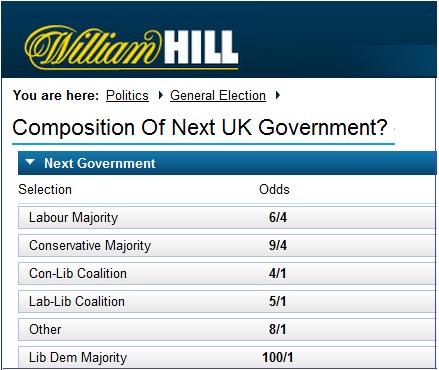 Will all parties be more wary about formal coalitions?

William Hill has just put up the above market on the composition of the commons after the next general election and I rather like the OTHER option which was initially priced at 12/1 and is now down to 8/1.

My reading is that this would cover situations where no party won an overall majority and that there was, unlike now, no formal coalition deal.

I cannot see either the Tories or the Lib Dems wanting to enter into another coalition relationship with each other even if the general election outcome made this possible. There’s too much bad blood on both sides..

Would this feeling extend to Labour? Would the experience since 2010 make them plump for a minority government if they didn’t get the seats for a majority?

My sense is that there is so much residual hostility within the Labour movement to the Lib Dems that it would be hard for Ed Miliband to go down the coalition route even if that is what he wanted.

It’s also getting much harder to see the Tories winning an overall majority particularly if the boundary changes don’t go through. That would make a double digit lead over Labour a requirement which is miles away from the way the polls have looked since the budget. On current numbers Labour would be heading for a landslide.

I got on the OTHER bet at 12/1 last night and think I got good value.