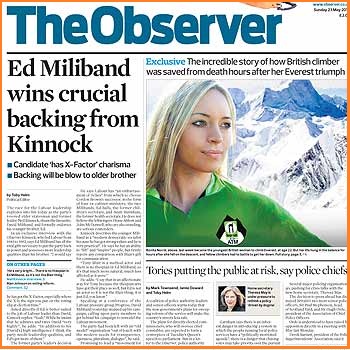 But is the former leader still influential?

There’s been a sharp move to Ed Miilband overnight following the publication of today’s Observer which leads on the intervention by the former leader, Neil Kinnock, into the race. On the Betfair exchange the younger Miliband brother tightened from 4/1 to 3/1 on the news while there’s been an easing of the price on his brother, David, who remains the odds-on favourite.

This follows earlier suggestions that the “other Ed”, Balls, might be having trouble finding the required 33 nominations from fellow Labour MPs to get on the ballot.

According to Toby Helm in the paper, Kinnock “…..says Ed Miliband has all the vital gifts necessary to put the party back in power and possesses more leadership qualities than his brother. “I would say he has got the X-Factor, especially where the X is the sign you put on the voting slip at election time.”

Asked directly if Ed is better suited to the job of Labour leader than David, Kinnock replies: “Yeah.” While he insists that he admires and rates David “very highly”, he adds: “In addition to his [David’s] high intelligence I think the party needs leadership qualities, and Ed’s got more of them.”

Helm says that this is serious set-back” for Miliband (D) and notes that Kinnock is “highly influential on the centre-left of the party and among the unions”.

This race, of course, has a long way to go and it won’t be until the final Saturday in September that we’ll get the result.

What could play a central role will be the televised debates between the contenders and my guess is that Ed will perform better than his brother.

According the the Labour Uncut website only David Miliband has so far got enough nominations. He’s on 38, with his brother at 18, Ed Balls at 20, Andy Burnham at 13 with John McDonnell picking up just two. There is no figure reported for Diana Abbott.