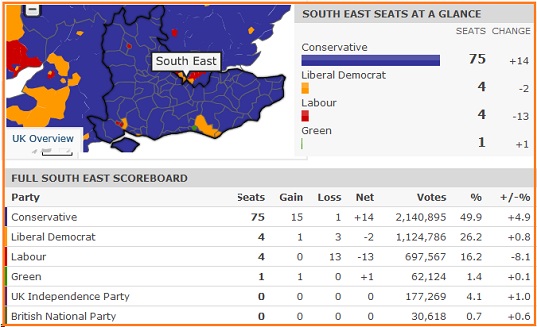 Will an English leader bring the voters back?

After looking at the challenge for the Tories in Scotland it’s also worth looking at parts of England where Labour took a terrible drubbing on May 6th.

Just look at the South East – Brown’s party got a smaller share of the vote here, 16.2%, than the Tories got in Scotland. Even worse they lost thirteen of the 17 that they’d held and were left with just four – two in Southampton and one each in Slough and Oxford.

Clearly if Labour is to make a come-back then it has to be winning here once again.

I just wonder how much was down to the Brown effect and whether a Labour led by someone else might make the come-back less challenging.