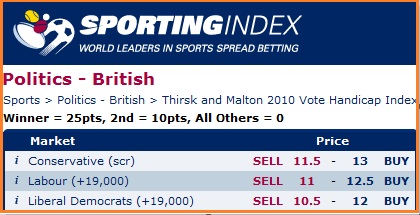 Is this a case of sell the Tories: buy the LDs & LAB?

SportingIndex has put up an intriguing handicap market on the final seat to be resolved in the 2010 general election – Thirsk & Malton in North Yorkshire where the election had to be put back until this coming Thursday because of the death of one of the candidates.

So to make this interesting SPIN is asking us to predict the winner with 19,000 votes added to each of the Labour and Lib Dem totals.

I’ve gone for a CON sell bet alongside Lib Dem and Labour buys. My reasoning is simple – turnout is going to be way down on what we saw nationally on May 6th and my guess is that the Tories will be doing well to come home with a total of 19,000.

There is a very good precedent – South Staffordshire in 2005 where the election was deferred for exactly the same reason. There turnout was reduced to to 37.3% and the Tory came home after chalking up only 13,343 votes.

Mike Smithson
***Bunnco on PB2 on the first coalition test***