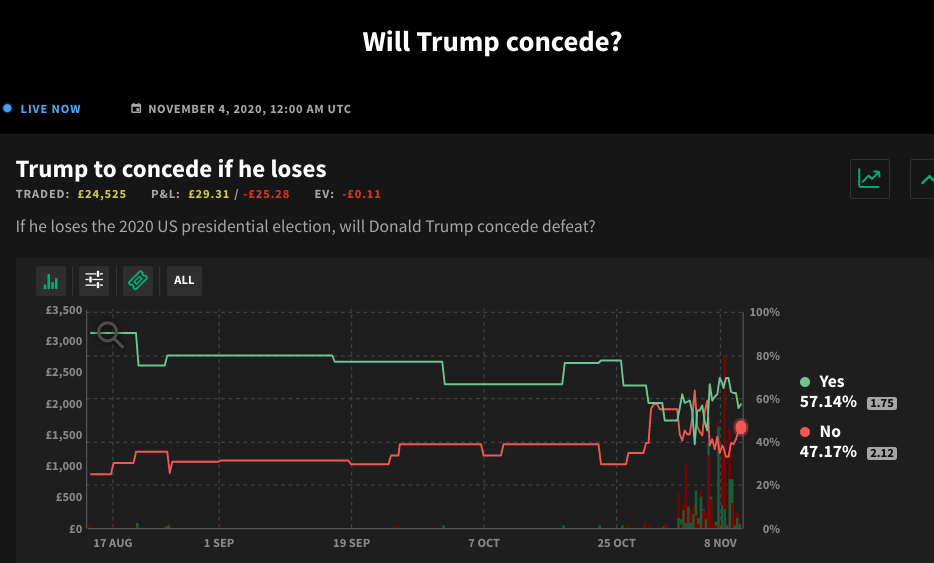 A week after the American election and four days after the results showed Biden on his way to victory and so far President Trump has failed to concede. It has very much gone the other way with all leading members of the Trump administration and prominent Republicans backing his notion that that there could have been voter fraud and he wasn’t going to stand aside.

Biden meanwhile is very much acting as the President elect making an announcement a day on key issues. Earlier in the week he set up a special task force on COVID and his latest move has been on the Affordable Care Act known as Obamacare which is under threat.

The innovative betting exchange alternative to Betfair, Smarkets, has the above market up and I’ve just had a small punt at longer than evens that Trump will never concede. I find it easiest in my mind to see this as the way forward rather than Trump acknowledging that he was a loser.

In political markets like this it is important to read the market rules and this is how Smarkets define it.

This market will be settled for yes if, at any point between 3 November 2020 and 20 January 2021 (inclusive), Donald Trump concedes that he has lost the 2020 US presidential election and/or acknowledges that he will not be president on 21 January 2021. His concession must be in a public setting (e.g. through a tweet or in a press conference). The concession must come from Donald Trump himself or through an official statement issued in his name.