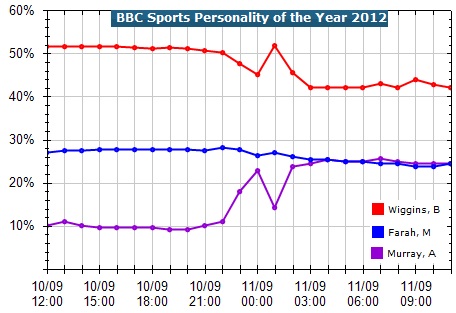 Following Andy Murray’s spectacular success in the US open overnight he’s moved sharply in the betting for December’s election for Sports Personality of the Year. the chart above shows the changes in the past 24 hours.

Notice how Andy Murray was moving up sharply and then slipped back as the match became more of a struggle.

If the Betfair markets have got this right this has become a three man race between Mo Farrah, Andy Murray and Bradley Wiggins – all of whom have had extraordinary success making unprecedented breakthroughs for Britons during 2012.

The election, which is by first past the post, takes place by people voting by telephone. The critical thing is who has got the biggest constituency of support behind them who will make the effort to get their choice in?

This is like any election and you have to look at the form book and previous voting patterns.

Given that two of the previous four SPOTY winners have been cyclists I think Wiggins is the favourite. The cycling lobby have a strong track record in getting their vote out and I think we’ll see a repeat in December.