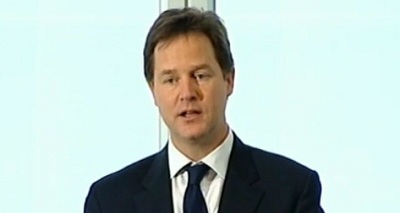 Some of the highlights of Lord Oakeshott’s interview.

His analysis of the Lib Dems’ position

“We have lost over half our market share, if you like to put it that way if we had been Sainsburys, since the election and any business that had done that would be looking very hard now at both its strategy and its management to see how we get some of that back because otherwise we are going to lose a large number of seats at the next election.”

As has noted been noted before, Vince Cable is popular with the electorate, whilst Nick Clegg is not.

Perhaps I’m reading too much into Lord Oakeshott’s interview today, but he is close to Vince Cable, I suspect during the conference season we’ll get some polling asking if the Lib Dems would be polling better if Vince Cable was leader.

If the polling shows that appointing Vince Cable as Lib Dem leader will lead to a release of copious amounts of electoralÂ endorphins for the Lib Dems, the murmurs to oust Clegg may well become a crescendo.

Five years ago, at conference, talk of defenestrating Sir Menzies Campbell gained credence, which led to his wife publicly telling Nick Clegg, “I don’t know whether you are being helpful or not.”Â Nick Clegg will be hoping that history doesn’t repeat itself.

Lib Dem voice noted last week,Â Â Nick Clegg is more exposed now than he was in MayÂ because of Vince Cableâ€™s recent hints that he is limbering up for the leadership.

As Martin Kettle says in today’s Guardian,Â With Vince Cable having said he is available, it seems the only question is when, not if, the party decides to oust its leader

William Hill have a market up on whether Nick Clegg will or will not be leader come the next general election.

Paddy Power have a market up on whether Nick Clegg will or will not be leader at the end of the year, and at the next General Election

They also have a market up on whom shall lead the Lib Dems at the next election.

There are several markets with various bookmakers, on who will be the next Lib Dem leader.