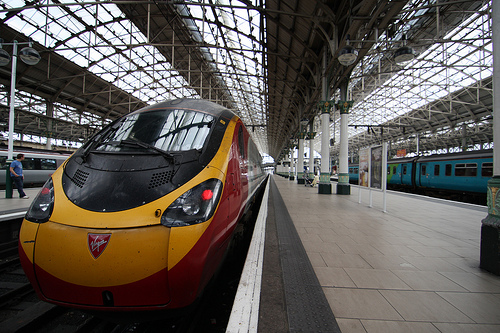 The debate thatâ€™s recently taken place over the awarding of the next West Coast mainline franchise to FirstGroup refocuses the spotlight on the proposed HS2 line, which if built would be a very serious competitor to it.Â  That the franchise runs until 2026 – the date proposed for the opening of the first stage of HS2 – is presumably not coincidental.

Will it be built though?Â  Thereâ€™s a lot of opposition along the way, both from those concerned about their metaphorical back yards and those who donâ€™t believe the figures stack up to make it worthwhile.Â  Both groups carry plenty of weight.Â  Once out of London, the line would travel through numerous Conservative constituencies and council areas, none of whom seem to have much good to say about it.Â  Itâ€™s an argument the government doesnâ€™t need and doesnâ€™t have to have.

Itâ€™s not just nimbies either.Â  Â£30bn for the whole route is a lot of money for a fifty-year old solution to a 1960s problem.Â  The Japanese built the first Shinkansen lines and the French their TGVs in the days before low-cost budget airlines, the internet and tablet computers.Â  And thatâ€™s assuming the cost comes in at the initial budget: a rare circumstance in major government projects.

Keynsians would of course argue that this spending is precisely what the country needs, and theyâ€™d have a bit of a point if the builders were waiting to go, but with judicial reviews and other delays, the country could well have had another boom and recession by the time the first earth is turned.Â  What then might be better options for stimulating the economy and improving the transport network without upsetting a load of the governmentâ€™s own supporters?

One of the main reasons for the opposition is that it would be a new line, often cutting through unspoiled countryside.Â  Upgrading the existing network is, by contrast, unlikely to generate the same degree of protest.

To that end, electrification of one or more of the Trans-Pennine, Great Western, cross-country and Midland mainline routes would be worth considering.Â

On the roads, upgrading the A1 to motorway standard between Leeds and Scotland is long overdue, while other long-standing improvements could surely be accelerated.

Then thereâ€™s the airports.Â  HS2 and an expansion of Londonâ€™s airport capacity are not entirely competing for the same custom but thereâ€™s certainly an overlap.Â  However, a new major east-of-London airport would bring strategic advantages for the UK that no train line could.Â  Despite being new-build, it wouldnâ€™t generate the same degree of political opposition, especially if located off the current coast (unlike expanding Heathrow).Â  For the government, thereâ€™s also the attractive prospect that much of the financing could come from private sources.

With so little spare money about, with so many alternatives and with so much opposition, itâ€™s difficult to see HS2 getting anywhere fast.Â  The hybrid bill paving the way for the route will itself be no simple legislative matter.Â  I wouldnâ€™t be betting on it being passed before the general election.