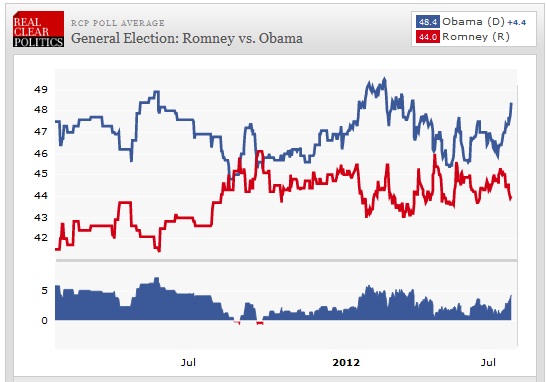 Did it start to go wrong in London?

The latest from the RCP polling average says its all – it’s been a horrible August so far for Mitt Romney.

This, of course, shows the national polling which had been holding up reasonably well for Mitt. The state polls particularly in the key swing states have, with just one or two exceptions, been bad for him as well.

As well as the negative media coverage of his foreign trip he’s had to cope with a barrage of Obama ads focused on his time at Bain and also his failure to publish more than two years of tax returns.

I got out of my Romney for President betting position several weeks ago and since then his price has moved out further.

The big question is whether he can turn round his campaign at the convention and with his VP pick.