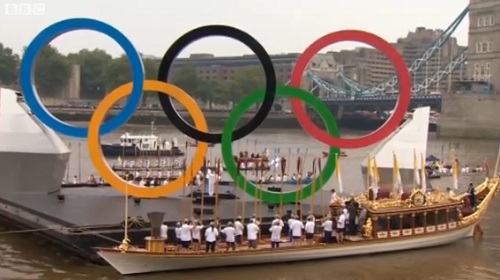 Bronze medal: David Cameron. Booed at the boxing, initially on the back-foot over sports funding and school physical activity and recovered with some steady media performances. However thatâ€™s nothing to really worry the PM. What will disappoint so much is to have been so overshadowed in these games by Boris Johnson. Prime Ministers donâ€™t often get such a rare window of good news and national attention. The combination with other events leading to some speculation that David Cameronâ€™s leadership is even on the line is one of lost opportunity and in stark contrast to Boris Johnsonâ€™s rise. It feels as though those tectonic plates are shifting.

Silver medal: Aidan Burley. The Cannock Chase Conservative MP condemned the popular opening ceremony on twitter as â€˜leftie multicultural crapâ€™ before digging a bigger hole for himself the next day with a series of ill-judged TV interviews. With an overseas police investigation hanging over his role in hiring a SS uniform for a Nazi stag party in a French restaurant the MP appears on a one-man bid to re-toxify the Tories at a time of many multiracial British success. No wonder David Cameron condemned his remarks as MPâ€™s remarks â€˜idioticâ€™. Burleyâ€™s local Conservative Association would be forgiven for wondering if another candidate might be better placed to try and retain the marginal Cannock Chase seat at next election.

Gold medal: Mitt Romney. The Republican presidential candidate had a shocking Olympics with a series of gaffes and ill-judged remarks nicknamed â€˜Romneyshamblesâ€™. What was meant to build Romneyâ€™s experience overseas led to him being the butt of ridicule from Boris Johnson, chided by David Cameron, criticised by 9 time Olympic gold medallist Carl Lewis and opening himself up to attack by his political opponents in the US. As the Guardian observed the consolation was at least Romney’s wifeâ€™s horse failed to offend anyone.

Bronze medal: John Major and Tony Blair. Blair delivered the Olympics and Major helped ensure the funding to help many of Britainâ€™s top performers reach their potential. John Major was neatly understated about his role while Tony Blair will advise Labour on the Olympics legacy. Both past Prime Ministers deserve their share of the credit. .

Silver medal: The Royal Family. Her Majestyâ€™s superb light hearted role in the opening ceremony was my personal highlight. Prince Harry along with the Duke and Duchess of Cambridge have all enthusiastically embraced the Olympics and have caught the mood. The Royal Family looked more at ease than during the Diamond Jubilee. Republicanism must be at its lowest ever ebb.

Gold medal: Boris Johnson. Forget those weird things Wenlock and Mandeville, Boris Johnson was the unofficial mascot of these Olympics. Like a cuddly hyperactive Big Brother. Rarely in a free democracy has one man so dominated so many media channels. It really is worth watching this footage again and again of the Mayor on top form. Listen to the crowdâ€™s response. We just donâ€™t do this in this country. Labour is beginning to wake up to the implications of a Boris-led Conservative Party. My colleagues are right to be worried at this uncontrollable force. They should be terrified.

Who have I missed?