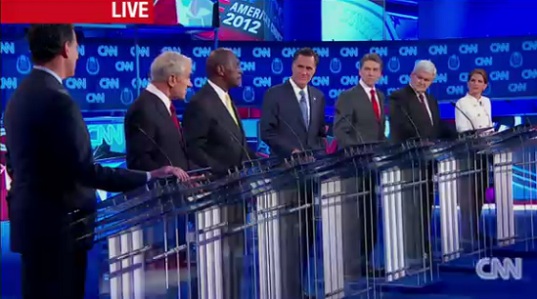 David Herdson on the Republican nomination.

What are the chances that Romney wonâ€™t be nominee?

Following his comprehensive win in Texas this week, the media have generally called Mitt Romney as officially over the winning line, with more than half the delegates for the Republican convention later this year.

Some states which held caucuses months ago have still to allocate their delegates as the initial vote was just the first stage in the process.Â  If delegates are apportioned according to stated intentions or the presumed outcome of these partially completed processes, Romney is indeed over the line.Â  If we just go with what is absolutely certain, not quite.Â  That said, with no serious rival and a bumper harvest coming up in the California primary amongst others, itâ€™s only a matter of time.

So, with three months to go to the convention is it worth cashing in bets on him now or letting them run?Â  At this late stage, there are still three main ways in which Mitt could end up without the nomination.

The first is that some scandal or gaffe erupts thatâ€™s so significant that he has to withdraw.Â  We can almost certainly rule out the possibility of some deeply hidden scandal: Romney has been a front-runner for the nomination for years.Â  Were there anything, it surely would have come out by now.Â  A dreadful gaffe is marginally more likely but again, heâ€™s gone through months under the intense glare of media and opponents and not come close to that sort of error.Â  There are many criticisms that can be levelled at him but a loose cannon isnâ€™t one of them.

The second is if health concerns force him out of the race, or if heâ€™s otherwise physically incapacitated.Â  Thereâ€™ve not been any signs that this should be an issue but itâ€™s always a possibility for someone in their mid-sixties whoâ€™s running for president: itâ€™s a draining and demanding process.Â  Thereâ€™s also the risk that those with ill intent pose.

Finally, thereâ€™s the chance that he is somehow manipulated out of the nomination.Â  This seems even more unlikely.Â  For all the efforts Ron Paul supporters might be putting in, there are simply too few delegates up for grabs now.Â  Even if they were to deny him an overall majority by working the state conventions (itself highly unlikely), Romney would still have an overwhelming relative majority and surely prevail on a second or third vote.Â  But weâ€™re getting into political fiction territory here.

Itâ€™s still possible to back Romney at 1.03 on Betfair and the lay price at the time of writing was 1.05.Â  Is the chance of his slipping up at this late stage really so high?Â  I donâ€™t think so and the value is probably still in backing him, though itâ€™s a boring bet.

Those wanting insurance might be better advised to look for who the alternative candidate might be in the unlikely event of a vacancy, which for all his supportersâ€™ fervour isnâ€™t second-favouriteÂ Ron Paul.Â  More likely would be either Rick Santorum, who ran a credible second in the real race, or some unifying candidate who didnâ€™t run at all.

We are now entering a different phase legally and and there should be no speculation, smears or innuendos regarding these developments.

Any posts on this subject matter needs to come from a reputable source, with a link.

Any poster disregarding this will have their post removed and will be banned from posting.