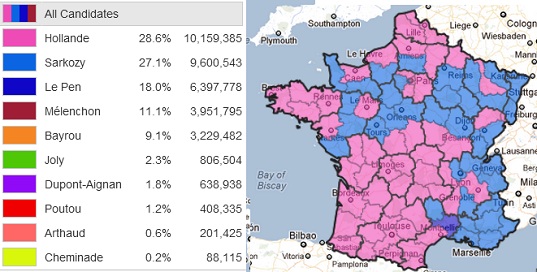 Overnight Nickolas Sarkozy became the first sitting French president to fail to win round one of a presidential election.

His margin of defeat was a touch closer than some of the polls were predicting but there’s little doubt that his Socialist party opponent, Francois Hollande has the momentum for the second round run off a week on Sunday.

The surprise was the good showing of Marine Le Pen for the far right National Front. It might be that her voters are the incumbent’s one hope of hanging on to office. Her 18% share was bigger the the 16% that her father once achieved.

For the centrist contender, Francois Bayrou, it was a disappointing night chalking up barely half of the 18% share that he secured five years ago.

Sarkozy’s big challenge is to appeal to far right voters while not alienating those in the centre ground. Can he do it? It looks very challenging.

Ladbrokes have Hollande at 1/10 to win with Sarkozy at 5/1. At the moment I’m not tempted either way.