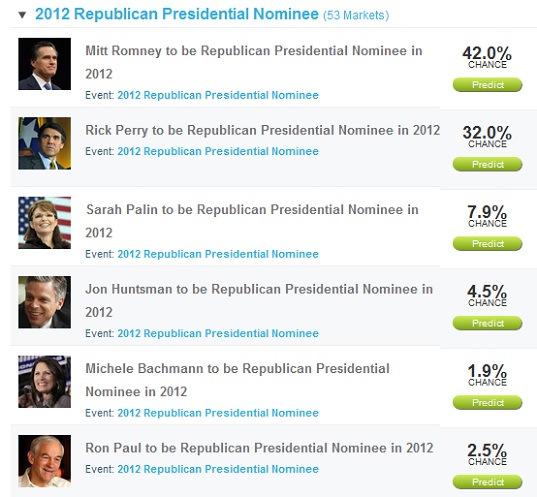 The money moves from the Texan after latest debate

There’ve been sharp moves in the GOP nominee betting following the latest TV debate between the declared contenders.

Mitt Romney has now tightened to 5/4 on Betfair while Rick Perry’s price has moved out. The Intrade market, on which a lot of US-based punters gamble, has Romney’s chances at 42% while Perry has slipped to 32%.

In the debate in Orlando all the other candidates made him the focus of their attacks and his responses were poor. Michelle Bachmann hit him once again highlighting Perry’s forced programme for girls as young as 12 against sexually transmitted diseases.

Perry had either not anticipated where he was vulnerable or else had poor unconvincing response lines.

This was PB poster chris_g00’s take on the previous thread:-

“….I can report Rick Perry is getting worse not better. Really easy rule to remember, if you mention your opponent by name he automatically gets a 30 second rebuttal, in a 9 man debate format, that’s critical. Romney seemed to get this message early, alas after 2 hours Gov Perry was still trying to nail Romney.

The low point was the audience booing a serving gay US soldier speaking via webcam from Iraq. Although I do hope all broadcasters get this message: I have no interest in what the man in the street thinks about the candidates or the issues, if I did have an interest I’d go and ask him. Fox billed last nights debate as the most interactive ever, this meant interrupting the debate to quote the latest interactive survey they’d just completed online and meant viewers could post their questions in the form of video messages, this slowed the debate down considerably.

The lesser known candidates had a choice, go after Romney because he’s not as Conservative as them, or go after the current conservative leader in the polls to try and win his supporters, in the main they choose the latter. By being Governor so long, Perry has a rap sheet as long as your arm, and whether it’s ordering the immunisation of 12 year old girls against STDs, opposing a border fence or giving education discounts to the children of illegal immigrants, he was just too easy a target. Romney won without breaking sweat, at the end I could almost hear the voice of Harry Carpenter saying ‘and now he’s dancing, he’s doing the Ali shuffle’