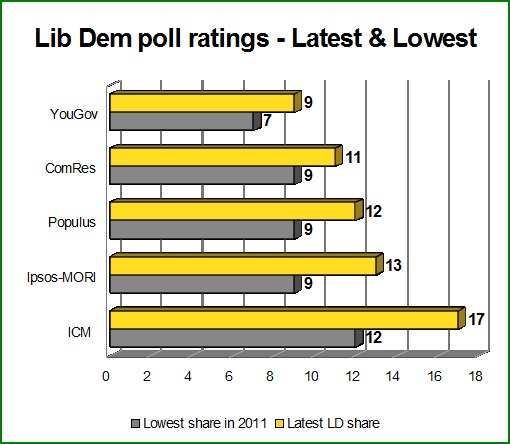 Today we start the 2011 conference season which is traditionally a time when we look at the state of each party.

As happens every year the first to he staged is the Lib Dem one which like the other main parties is holding its annual gathering in a big city, Birmingham, rather than at the seaside. Labour, next week, are in Liverpool while the Tories head to Manchester once again.

From a polling point of view the Lib Dems have had a dire year and none of their shares are anything like the 23.7% that they chalked up at the general election in May 2010.

But there is one positive element as can be seen in the chart. All the current ratings from the five main pollsters have them up on their low points of 2011.

The latest ICM rating of 17%, from its August poll, is still a fair bit down on the election but it’s five points up from the pollster’s lowest share.

Ipsos-MORI had them at 15% in August but that slipped back a couple of notches in the September survey this week.

The Populus 11% is the highest of the year while ComRes’s 11% is up on the low point but down on the 15% it reported in May.

Even YouGov’s 9% is up on the 7% low that the party has touched several times in the News International daily poll.

So the broad trend suggests that the LDs new approach to the coalition of seeking to be more distinctive is having some effect.