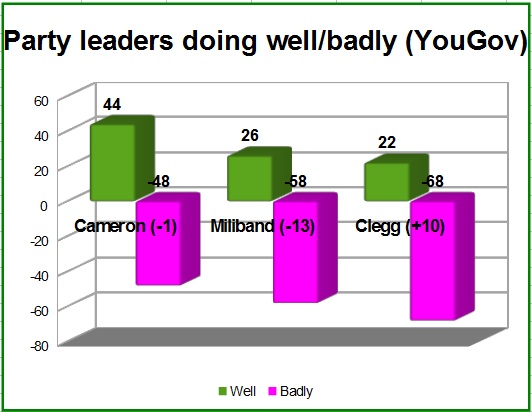 Details of the Sunday Times YouGov poll are just out with the latest leadership ratings for Cameron/Miliband and Clegg.

Here the pollster asks every week in the same standardised format whether those in the sample think that the leaders are doing well/badly.

The +/- figures in the chart above shows the current splits with the change since the start of the month. As can be seen Clegg has edged back from his ultra-lows and is moving a bit forward. Cameron is staying about the same but the sharp change has been with Ed Miliband.

The Labour leader’s split this week of 26 – 58 is the worst he has seen since being elected last September.

Yet there is a paradox Â – Â Labour enjoys a 42 – 37 lead in Â the voting intention figures with the LDs on 10%. So far, Â with YouGov at least, the poor leadership numbers don’t seem to have affected the VI ones.

We should get the MORI leadership ratings in the next few days. The firm’s question is about whether respondents are satisfied/dissatisfied and has been asked in that form for nearly a third of a century.