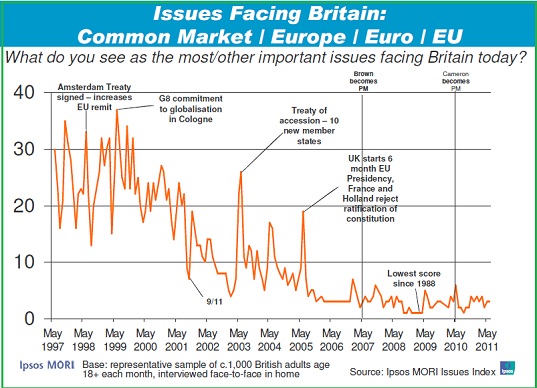 What’ll be the impact of events in Athens?

One of the findings in the monthly MORI issues index that invariably attracts controversey is on the EU/Europe. This month there was a zero score for those making it the main issue and just 3% listed it as one of the “other issues”.

How can it be, it is asked, that so few people seem to care? That’s hard to answer but even in the survey that coincided with the June 2009 EU elections the index showed just 5%. In those elections UKIP came out with nearly one in five of all votes cast

The key is that in the MORIÂ face to face interviews respondents are simply asked to list any number of key issuesÂ and are not prompted. It it’s not on their mind then it doesn’t register.

Fieldwork for the latest survey took place just before the Greek crisis became centre stage with all the implications that could have for the EU and the global financial system.

If the resolution of that has an adverse effect on the UK then the MORI chart could look very different in the second half of the year.