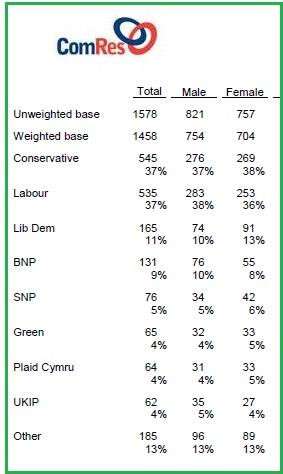 The latest ComRes poll for the Indy on Sunday and the Sunday Mirror is, on the face of it, bad news for Labour, okay news for the Tories but sensational for the BNP.

I’ve extracted the table from the detailed data and I cannot make head nor tail of it.

Another Â amazing figure if the 4% for Plaid Cymru. That percentage in a GB poll equates to a share in Wales itself of perhaps 80%!

The final amazing figure is the 13% for “others” which normally is for parties too small to be reported on their own.

ComRes is by far the best of the pollsters in getting its detailed data out – generally this is published at the same time as the headline figures themselves. It’s only because that’s available that question are now being raised.

Last night I emailed the boss of the firm, Andrew Hawkins, and I’ll report his response as soon as I get it.

UPDATE – The head of Comres, Andrew Hawkins has now responded. This was his email.

“Thanks for bringing this to my attention.Â  Weâ€™ve been taking a look into it and have rectified it.Â  I can confirm that itâ€™s purely an â€˜Othersâ€™ coding issue and doesnâ€™t affect the voting intention results in any way.Â  Weâ€™ll be publishing a corrected set on the website tomorrow.”