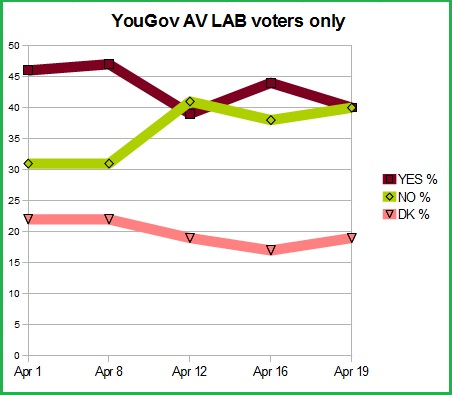 Will the new “hurt George and Dave” effort change views?

My reading of the referendum battle is that the only way that YES can come back from behind is if there’s a sizeable switch of Labour voters to their side.

Currently it’s broadly 50:50 which reflects the views of the parliamentary party. It really needs to be 60:40 for the effort to abandon FPTP is to be successful.

Ed Miliband has hardly been conspicuous in his advocacy of the side he says he’s backing and he’s playing a much lower-profile role than Cameron is for NO.

This means, of course, is that if by any chance YES wins Ed will get much less kudos than Cameron will if it’s a NO.

Today’s move by Peter Mandelson marks a new stage by the Labour YES campaign which also sees the launch of a poster campaign aimed at Cameron & Osborne.

At the moment we are without new polling. We didn’t see the usual YouGov Sunday Times survey and there’s been nothing at all since the TNS poll last week. The Harris poll reported overnight was actually from April 11th.