A guest slot by Rod Crosby

Amid the knockabout fun of the AV referendum campaign I’ve noted little serious analysis of where we currently stand under FPTP, and where we might end up, depending on the outcome on 5th May. The Reactionaries among us, nominally Conservatives, simply view AV as the work of the Devil, and seem incapable of offering any reasoned argument for its rejection – nor, just as importantly, for the retention of FPTP. But is the Alternative vote all that it seems?

All aboard the FPTP bandwagon: Destination PR?
The Estonian political scientist Rein Taagepera specializes in quantitive analysis of democratic systems. One of his handy metrics is the ENP – the Effective Number of Parties. In a one-party state it would be one, in a classic two-party system it would be 2, and in a multi-party system any number significantly greater than 2. In 2010 the UK ENP was 3.7, the highest ever. So far as votes are concerned, the UK is now closer to a four-party system than to the two-party paradigm. 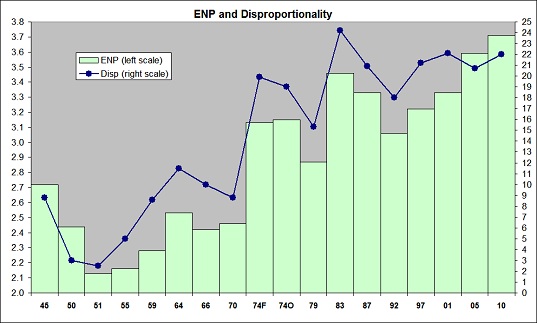 We see that since 1951 the ENP has risen inexorably, with Disproportionality rising in almost perfect lockstep. If ever one wanted proof that FPTP is a system built for just two parties there could scarcely be more persuasive evidence. Between 1950 and 1959 the UK system delivered what were, by objective measures, highly proportional outcomes, but – particularly since 1974 – the system has degraded to an extent which might now embarrass a banana republic.

In fact, in the entire democratic world, only Bhutan, Botswana and Belize have more disproportional chambers than the British House of Commons.

Bhutan at least has an excuse – they are a new democracy, with just one election under their belt. Their Electoral Commission nevertheless acknowledges the unsatisfactory outcome, but avers that, unlike the UK, they are simply ‘too unsophisticated’ to contemplate a better system just yet!

How long can this state of affairs continue, and – judging by the trend – continue to get worse in the UK? The answer appears to be – not long…

The Catalan political scientist Josep Colomer has analysed the transition from FPTP to proportional representation across 219 elections in 87 countries since the dawn of democracy in the 19th Century. His statistically-robust conclusion is that the tipping-point occurs at an ENP of around 3.0, when it becomes more likely than not that plurality systems will be abandoned for proportional representation, and all but inevitable when ENP exceeds 4.0.

Indeed, only one country with an ENP of greater than 4.0 retains FPTP: India, although there, unusually, FPTP produces much more proportional outcomes and regular hung parliaments, perhaps countering any pressure for change. Low literacy levels may also be a factor in the retention of the simplest possible electoral system.

So it seems that if FPTP is retained in the referendum, the next step, sooner or later, will be to full PR, a fortiori since the ‘miserable little compromise’ now on offer could scarcely be offered again.

2PP or not 2PP, that is the question…
One feature of AV in Australia which is seldom mentioned here is the Two-Party Preferred Vote (known as ‘the 2PP’). Although it has no direct bearing on the outcome, this statistic is officially collated a couple of weeks after each election, and becomes part of the public record. It is also widely used by the media, and is a perennial topic of discussion among politicians and pundits. The winning party likes to also win the 2PP, as it adds perceived legitimacy to the overall result.

The 2PP is calculated as follows:- irrespective of the outcome in each constituency, the votes for parties other than Labor and the Coalition are ignored, and all preferences redistributed between just these two blocs, then totalled across the country. For example, at the last Australian election, while 1st preferences were:-

We notice two things. Firstly, the 2PP frames the entire election as a binary choice between just two parties. All votes for other parties are simply ignored. Second, in Australia the actual number of people casting first preferences for parties outside the duopoly is significantly lower than in the UK. [18.7% versus 34.9%] About half as many, in fact. Is it possible that these two things are related? Does this 2PP framing in practice depress the votes for smaller parties? I don’t know the answer. However it surely invites pause for thought for progressives, and offers some encouragement to conservatives in both the major parties.

Curiouser and Curiouser…
Should LibDems and other progressives vote NO, since it can only be a matter of time before FPTP breaks down completely, and Britain follows the path tread long ago by all other European democracies, towards the sunlit PR uplands?

And should Tories and Labourites vote YES, to shore-up the status quo, to preserve what can be preserved, choosing the system which seems most likely to maintain their two-party dominance?

It would be amusing if – whichever side wins the referendum – the result, in time, is the exact opposite of their expectations…