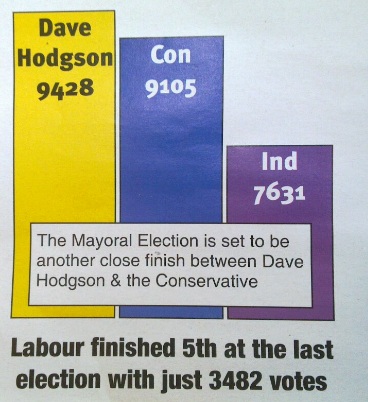 Will this mayoral battle be best pointer on the night?

With Jackie Ashley in the Guardian and Tim Montgomerie at ConHome both raising the prospect of 2011 general election a big question is whether such a gamble by Dave would pay off.

For the only point in going to the country four years early would be to secure an overall majority so the party could rule without the need to consider the yellows.

Such a battle would be on the existing boundaries and the Tories would need to pick up a clutch of Lib Dem held seats in order to get over the magic 325 total that would mean an overall majority. The question is whether those would be as easy pickings as current polling suggests?

A good indicator, I’d suggest, is be the battle for the elected mayoral position in Bedford Borough. This was won by the yellows in a by-election in October 2009 and now both parties are fighting tooth and nail for victory. With a huge amount of literature going out and visits from cabinet ministers of both parties, including Dave, this has all the feel and intensity of a Westminster by-election.

The Bedford result will demonstrate two things which should be central to Tory calculations – the power of Lib Dem incumbency which has frustrated the blues in the past, and the willingness of Labour supporters to vote tactically for the yellows.

It does have the added dimension of a form of AV being in force. Like all other mayoral elections voters get a second preference. What will Labour supporters do?

I am close to this and find it very hard to call but I do believe that the outcome will be a good pointer for both parties.