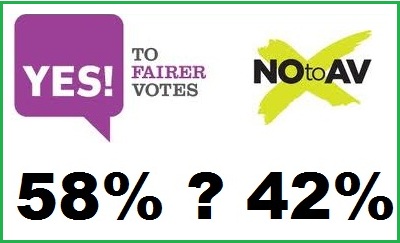 There’s a new AV poll from YouGov just out that was commissioned by the Institute for Public Policy Research and has findings that are very different from other recent surveys from the online pollster.

After re-percentaging so that only decided voters are included the survey found YES ahead by 58% to 42% – a lead of sixteen points. This compares with the most recent YouGov AV poll that has NO 8% ahead.

What makes me nervous about the IPPR survey is that before the AV voting intention question was put those sampled were asked a series of other questions which might have influenced their views. This is how the poll questioning went:-

Which of these do you think is more democratic?
For each MP to secure support from at least half of all local voters, so that they are seen to represent a majority of voters locally

For each MP to have more support locally than any other candidate, even if they don’t reach the 50% mark

Which of these would you prefer?
A voting system in which extremist parties have a good chance of winning seats in a general or local election if they have the support of around one-third of local voters

Which of these would you prefer?
A voting system which encourages parties to have clear and distinct policies, and not to compromise

A voting system which encourages parties to reach out to voters as widely as possible, and to compromise when necessary

Then the sample was asked to tale part in what’s presented as a mock AV election and further questions were asked including:-

Suppose the candidate who is elected MP is your second or third choice candidate. Would you…

In the past have you ever engaged in ‘tactical voting’ in a general election – that is, voted for a party not because you liked
it, or its candidate, best, but because you felt that your favourite party could not win in your area?

Yes, I have voted for my second choice party/candidate at least once

No, I have always voted for my favourite party/candidate”

As a general rule the key VI point is put at the start of an interview so that respondent’s answers are not conditioned by the process of being polled.

So an interesting poll but one not too put too much emphasis on.