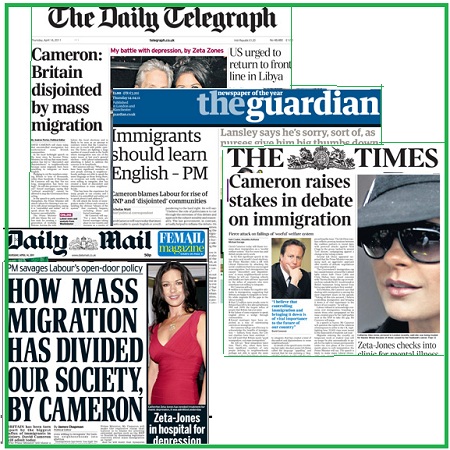 Has Dave decided on a core votes strategy?

With three weeks to go before the May 5th elections David Cameron is getting big headlines this morning over a speech that he’ll make on immigration.

This marks a big change from last year’s general election when the main parties sought, each for their own reasons, to side-step the issue even though it generally ranks as one of the public’s main concerns.

So what’s prompted today’s move in which he will attack Labour for presiding over the “largest influx” of immigration in British history and creating the conditions that enable parties like the BNP to flourish?

My guess is that the real concern is UKIP which has been edging forward and, of course, came in second place in last month’s Barnsley by-election.

We also saw in March the Tunbridge Wells council by election where the Tories lost a seat to the Lib Dems after a big slippage of votes to Farage’s party.

At this week’s Political Studies Association seminar on the local elections Matthew Goodwin of Nottingham University spoke of how UKIP is now broadening its message well beyond the EU and is touching, in particular, middle aged/elderly men from Tory voting backgrounds. These are groups who do turnout at local elections.

He noted that UKIP is free of extremist baggage and is well positioned to become a successful radical right party, making inroads into the Conservative vote.

There is a danger for Dave in all of this. Going big on immigration hardly helped Michael Howard in 2005 and does not fit so comfortably with his detoxification strategy.