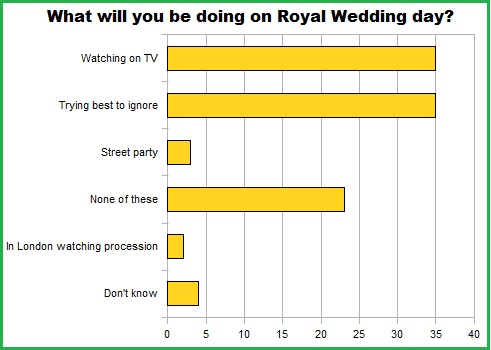 Over the past 24 hours I’ve been betting quite heavily on the Bet365 market on the size of the BBC TV audience for the Royal Wedding on April 29th.

The latest YouGov findings on the public’s view, featured in the chart above, suggest that the talk of massive audience might be over the top. That only 35% told the pollster that they would be watching on TV, exactly the same proportion as those saying they’d be “trying best to ignore it“, is a good pointer.

A TV audience specialist who I consult on these matters points out that the BBC will be facing strong competition from ITV which is providing ad-free coverage.

The Charles and Diana event in 1981 attracted an audience of 28 million. The nation has moved on a long way in its view of the royals since that day and taking all the factors into account the less than 21 million bet seems a good punt.

If you want to be ultra-safe then PaddyPower has 4/9 on the BBC audience being less than 26 million.