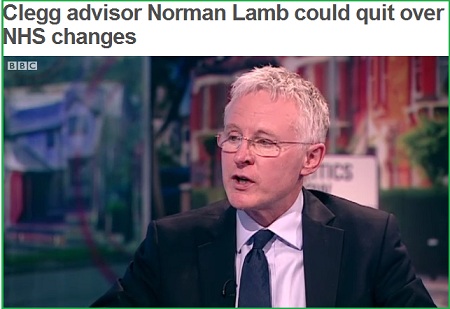 Is the Lamb threat pointing to greater LD assertiveness?

I’ve been out all day and am only just catching up with the Norman Lamb interview on today’s Politics Show in which he threatened to resign over the NHS changes.

Although he is not that well-known Lamb is a key figure within the party and as well as being an assistant whip is also a close advisor to Nick Clegg. I cannot believe that he would have gone so far as to make the threats without having cleared it with the leader beforehand.

Norman Lamb is not the sort of politician who “goes rogue” – he’s a loyalist to the core and also a very nice guy.

In the following comment it’s clear that Lamb fully understood the wider implications of what he was saying – this goes to the very heart of how the coalition operates:-

“..We’re experimenting with Coalition Government, the first one since the Second World War. I hope that this period for reflection should allow mature debate about how we get these reforms right and that it should be possible for me to speak out and say what I think should happen â€” evolution not revolution â€” and in that way I think the Government can get itself off the hook that it’s on at the moment.”

I can’t see the Lansley plan going through unchanged and the coalition surviving – it’s as serious as that.