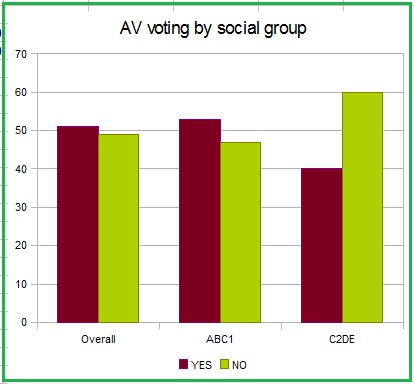 Could this have a critical affect on turnout?

It was Andrew Rawnsley in the Observer at the end of February who spotted the socio-economic splits in voting intentions on the referendum with those in the lower social groups be more likely to be NO than those in higher groupings.

At the time he wrote:- “….The no campaign will probably not put it so indelicately themselves, but they are calculating that their best hope of preserving first past the post is to mobilise what you could crudely call the Thicko Vote.â€œ

Today’s findings from YouGov bear this out – as can be seen from the chart there is a large gap between the social groupings.

One thing that’s difficult for those trying to predict or wanting to bet on this election is that we have not seen any findings from a telephone poll since February.

All the surveys since then have been by YouGov, Angus Reid with online polls from Populus and ComRes. The recent Populus poll did not even use the wording that’s on the ballot.

At the general election five of the top six places in the polling accuracy table were occupied by phone polls – five of the bottom six slots went to online firms.

Hopefully we will see phone surveys from ICM and Ipsos-MORI in the next week or so.