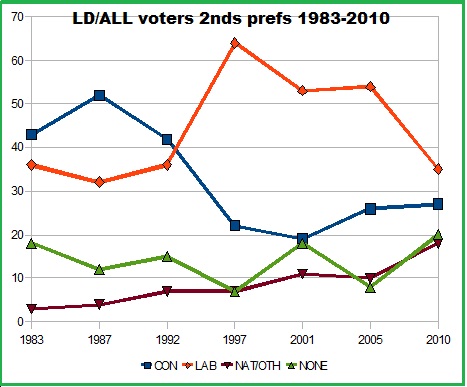 Which party’s the most to fear from AV?

The chart was prepared from polling data gathered by Professor John Curtice and presented to last week’s session on the alternative vote organised by the Political Studies Association.

For each election those who had voted were asked who their second preference would be if they had had a choice.

What’s striking about the historical line is that 2010 was the only one of the general elections where the LD split was not in favour of the overall winner on seats. The trend, however, is moving towards where it was in the 1980s – the Tories being most favoured.

Given the seepage of LD support to Labour it’s not surprising that the latest polling finds that Cameron’s party would pick up considerbly more votes – which could make a difference in marginal seats.

But yellow perceptions of the blues are based on how the party is currently operating in coalition – would it be different if the Tories had an overall majority and were able to operate without the need to consider the LDs?

My guess is that it would.

There is other data on Labour and Tory voters which I’ll feature at a later date.