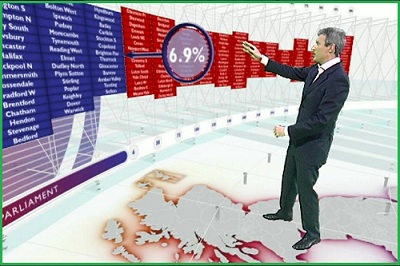 Can the red team no longer rely on “the system”?

For the last twenty years, the Conservatives have needed a greater share of the vote than Labour in order to win an overall majority. That was the case for three main reasons: a higher turnout in safe Conservative seats as against safe Labour ones, a much greater willingness for Lib Dems to tactically support Labour to keep the Tories out than the reverse, and Labour seats being on average smaller than Conservative ones.

At least two of those factors now look weaker than they were a year ago, never mind ten years ago. The next election will be fought on new boundaries that go a long way to ensure that very nearly all seats will be about the same size. Indeed, if the rate of registration in Labour-leaning areas is lower than that in Conservative ones, then the populations in Labour seats may be larger (though the electorates wonâ€™t be).

The factor least affected is the differential turnout in safe seats. As safe seats tend to cluster in regions, itâ€™s likely that where there are safe seats now, thereâ€™ll be safe seats after the review and that the turnouts will remain much the same. Even so, the boundary review will mix things up to some extent and where part of a previously safe seats transfers into a marginal, that should provide a greater boost for the party where there was previously the higher turnout.

The biggest effect though is in the tactical game. Since the coalition formed, the Lib Dem vote has roughly halved. By far the largest proportion of those lost voters have gone directly to Labour. That looks pretty drastic – but is it as good for Labour or as bad for the Tories as the bald figures appear?

The answer depends to a great extent on where those voters are. All the more so as thereâ€™s been virtually no direct movement between Conservative and Labour: nearly all the â€˜swingâ€™ is actually the effect of movements to and from third parties.

It seems highly probable that the sort of switcher who has gone from Lib Dem to Labour is the sort who was always Labour-inclined and may have even been Labour-identifying but for local circumstances. There are, after all, a lot of seats in the south of England and rural parts elsewhere where Labour is well out of the game. Tactical voters in these places returning to their natural party would clearly damage the Lib Dems but may even benefit the Conservatives as long as Labour doesnâ€™t get too many of them. For Labour, it would be a lot of extra voters adding up to not many more seats, again, reducing the structural bias.

The tactical voting game may even have gone into reverse, with the remaining Lib Dems now favouring a Conservative or Conservative-led government over a Labour or Labour-led one, even if not by the margins seen earlier this year.

Of course, not all switchers from the Lib Dems to Labour will be former tactical voters. Some will have been put off by Brown or some aspect of Labour in government, which their going into opposition and the Lib Dems into government has negated; some will be public sector workers or others upset at current government policy and believing that Labour would have protected them better; some may find inspiration in Ed Milibandâ€™s leadership. These voters are likely to be more evenly spread across the country and will represent a genuine swing.

All this is without the massively complicating factor of the possible introduction of AV. Leaving that to one side (and weâ€™ll know whether we should or not soon enough), weâ€™re already in a very changed world, and one that should greatly affect the seats markets for 2015.