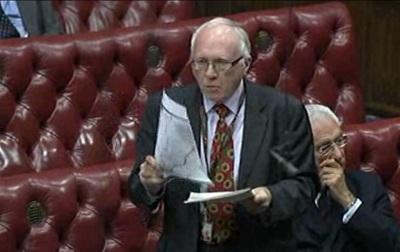 Could AV be introduced even if the country voted NO?

So Monday’s vote (a squeaker at 219 Content vs 218 Not-content) in the House of Lords was on an amendment introduced by Lord Rooker, and read simply:

“If less than 40% of the electorate vote in the referendum, the result shall not be binding”

Ignoring for one moment the rights and wrongs of turnout thresholds, I’m not sure what impact this might have on the respective campaigns. My first thought was that it perhaps has no effect on the ‘YES’ campaign, who would be seeking to mobilise the maximum number of votes possible in any case. For the ‘NO’ campaign, the issue is a little more problematic. There are now, I thought, two ways for the NO campaign to ‘win’ – getting more votes than the YES campaign, and/or keeping turnout so low as to make the provisions non-binding.

These two means of winning, though, are in conflict – a turn-out-the-NO-vote effort of course would help beat the YES vote, but if they fail to win, those NO votes only act to push up turnout and make the YES victory binding. Thus additional NO votes could actually help the YES side.

Conversely, the NO campaign could try and win on turnout grounds – tell all of their supporters to stay home, so that only YES voters actually vote in the referendum. Unless the YES campaign can persuade a full 18 million voters (about the absolute number who didn’t vote for UKIP or the Tories in 2010) to actually vote YES, then the referendum would become merely consultative. A victory of sorts – the YES campaign wins 100% but probably not enough people to make the result binding.

If only it were that simple. Given the other elections on that day, plenty of NO voters would in fact cast their votes (even if they had been advised not to) and would likely help tip turnout up-to-or-over 40%. Suddenly the NO “victory” (100% YES on 35% turnout) would become a crushing YES victory (90% YES on 41% turnout).

But then read the Amendment more carefully: the 40% threshold doesn’t invalidate the referendum. It merely amends the Bill so that instead of the Minister, in this case DPM Nick Clegg, being ordered to introduce a Statutory Instrument to implement AV, he would have discretion as to whether or not the turnout and result justified the change.

In fact, even were the NO side to win on a turnout of less than 40%, the result would merely be consultative and non-binding, meaning that Nick Clegg would still be permitted to implement AV.

This is fanciful perhaps, but it suggests that reporting of the Rooker Amendment has been a tad misleading. The reports of the death of AV have been greatly exagerrated – if the referendum doesn’t get 40% turnout, it will be the most expensive opinion poll ever carried out in the UK, but Nick Clegg will still be able to introduce secondary legislation to see AV used at the next General Election.

AV will not be brought in by a referendum. It will not be brought in by a new Act of Parliament. It will be brought in by an Order (under Statutory Instrument) by the Lord President of the Council, Nick Clegg. If the Rooker amendment stands, Clegg is bound by the result of the referendum. If the turnout is below 40%, he can use his discretion as to whether or not to make the Order. I suspect the drafting of the Bill (the Rooker amendment in particular) might inhibit Judicial Review of any decision Clegg might make. Thus, if the NO side won on 35% turnout, and Clegg decided to go ahead any way, the only forces in the world that could stop him would be politics and an Act of Parliament. Both would shatter the coalition, but then Nick Clegg would have delivered what he promised to the Lib Dems and given them a much better shot for the immediately ensuing General Election. Might that not be worth it?

The Rooker Amendment has been reported as being noxious to the prospects of AV. I think differently. If I were Matthew Elliott, I’d be more wary of a low turnout than ever – perhaps it is the YES TO AV campaign who should be thinking about not-turning-out-the-vote, to give the man who secured the referendum completely unfettered discretion about changing the voting system…

Morus has been a PB guest editor since 2008