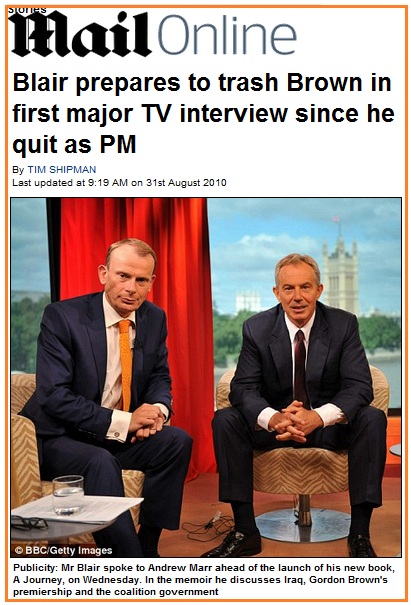 Is everything still being defined by the ex-leaders ?

The big news for Labour as we move into September should be the start of voting in the first contested election for a leader since 1994.

Instead the media remain obsessed with the Blair-Brown years and “what really went on”. Just look at this week. A couple of days ago the Mail on Sunday had the second part of the serialisation of the Chris Mullin diaries. Yesterday a short series began on Radio 4 with an abridged spoken word version of the same book.

And on top of that the big one – the publication on Thursday of Tony Blair’s book “The Journey” and the associated media hype.

It is Labour Past rather than Labour Future that the media is interested in.

Look at the the scheduling tomorrow evening in prime time by the BBC of a special programme devoted to an interview with Tony Blair. That’s already been recorded and, as the above piece from the Mail shows, a spin war has broken out over what Blair might or might not have said.

The report goes: “Mr Blair will defend his role in the Iraq War and pass judgment on Mr Brownâ€™s handling of the financial crisis and the election campaign, and the performance of the coalition Government. Mr Brownâ€™s allies are preparing a counterblast amid reports that Mr Blair will blame his successor for losing the election by turning away from his New Labour reforms.

My reading of Tim Shipman’s story is that this has come from the Brown camp and they are seeking to get their retaliation in early – a classic spin tactic from the whole Blair-Brown period.

The problem for Labour is that the Brown-Blair war gets more fascinating the more detail that comes out. The result – lots and lots of coverage.

In terms of the current leadership battle I wonder whether this might hurt David Miliband a bit – he’s the one contender who is most associated with Tony Blair. In the betting Betfair have DM at 1.39 with EdM having moved out to 4.