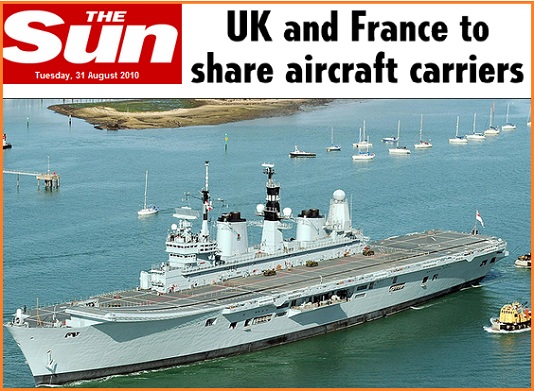 Is this taking defence cuts too far?

The main news on the front page of the Times which is covered at length in its sister paper the Sun, is about a plan for Britain and France to “share” their aircraft carriers as part of massive economy measure.

The idea is that Britain would scrap or downgrade one of the two replacement carriers which are already under construction at a cost of more than Â£5bn and that that one of three ships – one French, two British – was always on duty patrolling the seas. The implications for shipyard jobs are enormous as well as the strategic issues.

No doubt in the coming months we’ll hear a lot about the Falklands war in 1982 and the role of the Royal Navy then. Would the French have sanctioned such an invasion if it was “their” aircraft carrier that was “on duty”?

Apparently Cameron and Sarkozy are expected to outline the proposal in a November summit and the arrangement is expected to come into force soon after.

This is getting into very dangerous political territory for the coalition. The Royal Navy has had such an important role in the history of Britain and is deep in the national psyche. That we cannot afford to maintain its role without doing a deal with our traditional “enemy” across the channel will to many people appear shocking.

It does send out a message about the seriousness of the government in its attempt to curtail spending and could become hugely symbolic. Maybe that’s the idea.

One thing that strikes me – only a Tory Defence Secretary could ever propose such a plan. Imagine the reaction from the blue team if it had come from Labour?