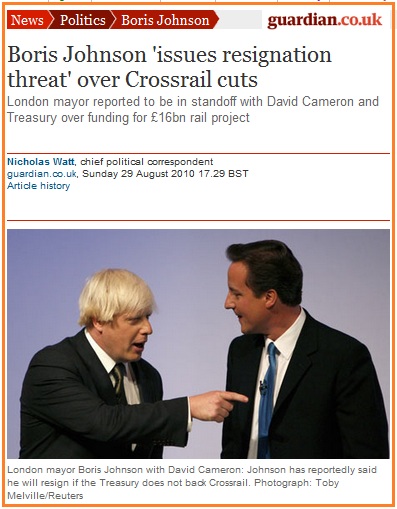 According to the Guardian, though denied by the Mayor’s office, Johnson has let it be known has let it be known that if all the money is not forthcoming then he will stand for parliament at the next available Westminster by-election. This, of course, raises the possibility of mayoral by election in London involving the capital’s 6m voters.

What the veracity of this is we do not know but Boris is a wily political operator who could be a big threat to Cameron’s leadership if he returned to the commons as an MP.

This could have an impact on a range of betting markets. Even though he is not an MP Boris is the betting favourite to be the next Tory leader. Ladbrokes have him at 5/1 the same as Michael Gove but tighter than the 8/1 against William Hague who has seen an easing.

Boris is also the 4/5 favourite to win the 2012 London Mayoral race – though Bet365’s 13/8 against Ken winning starts to look quite tempting. He has, of course, to be selected as Labour’s candidate – a party election that is taking place in September.

The problem with the “Boris returning to Westminster at a by election” theory is that safe Tory seats don’t come up very often. In the past decade only one sitting Tory MPs has died causing a by election – the total of Labour MP deaths in the same period was ten.

If Boris was to try to get back then the best route would be if a current Tory MP decided to stand down to make way for him – and that is fraught with danger. Voters have a history of punishing parties that cause unnecessary by elections. The Tories also have a miserable record defending by election seats while they are in government.