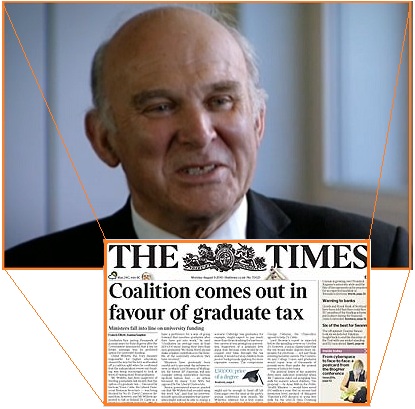 Will this reinforce yellow support for the coalition?

Both the Times and the Telegraph this morning carry news on their front pages that the coalition is to back Vince Cable’s Lib Dem proposal that university tuition fees should be replaced by what will surely become known as the graduate tax.

Both papers are following up on an interview in the Sunday Telegraph at the weekend in which he was quoted as saying that the PM was “100% behind the plan” which seeks to find a resolution to an issue that has been around for nearly two decades – how universities should be funded.

He said: “What we are trying to inject into the argument is that if you become a very highly paid investment banker you finish up paying more than if youâ€™ve gone off and become a voluntary worker or become a physicist in the National Physical Laboratory, or whatever.”

The actual details of the proposal will be fleshed out once once the ex-BP boss, Lord Browne, publishes his report on higher education funding in the autumn.

According to the Mail the notion of a graduate tax has been re-branded. As the paper reports “the idea… is anathema to many Tories, who see it as little more than an excuse for levying another tax on the middle classes. As a result ministers have now started referring to it as a contribution”

If this is indeed the case then it is a big victory for Vince which will help the Lib Dems ahead of their conference next month. At the same time it might present a challenge for the Tory leadership in their dealings with the right of the party.

This is the new world of coalition politics which all sides are going to have to get used to.