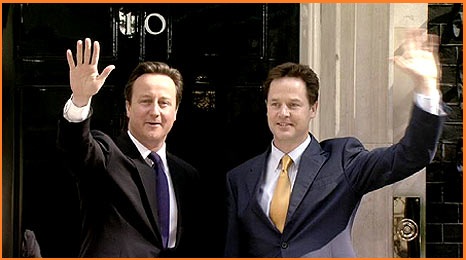 1) Lipstick on a pig: a hard-line Conservative government with some Lib Dem detox;

2) An exceptional response to exceptional times, where getting the economy back on track is the sole priority of two right-thinking parties;

3) A true fusion of Lib Dem and Conservative aims to produce something that is better than the sum of the parts; or

4) A left-wing Conservative conspiracy with the Lib Dems against the right wing of the Conservatives?

Thanks to antifrank on the previous thread for this.

His observation was “At present, the public seems to be buying 2, the Labour party is energetically promoting 1, the Lib Dems would like us to think 3 and Simon Heffer and Tim Montgomerie think 4. I have yet to make my own mind up.”

What do you think?