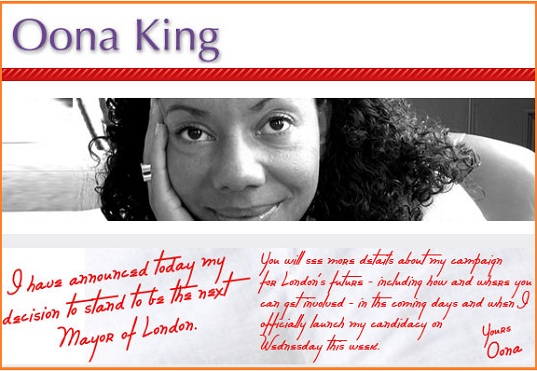 Overnight I got 33/1 against here winning the mayoralty with Victor Chandler – that’s now tightened to 10/1 though Ladbrokes have her at 12/1.

Five years ago, of course, Oona lost her Westminster seat to George Galloway in a fierce campaign. She has an interesting ethnic background with a Jewish mother and an African-American father.

Her first hurdle in getting to City Hall is the battle with Ken Livingstone – someone you should never write off though I wonder whether the party might be looking for somebody new and younger this time.

Then if she gets the nomination in September she has the tussle with BoJo, assuming he wants a second term, in May 2012.

Although the Tories might be quite unpopular in a couple of years time Boris, like Ken before him, has managed to dissociate himself when it has suited him from his party.

London mayors tend to be figures who are just known by their first name. Oona would seem to fit that and is probably worth a punt.