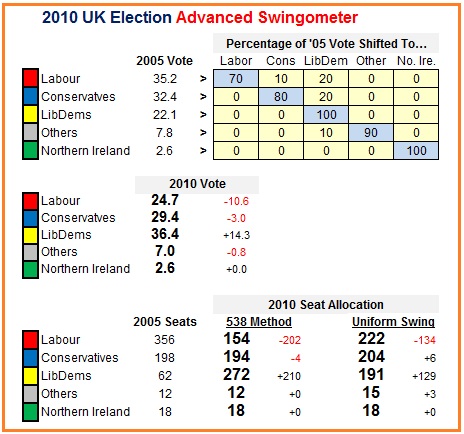 Nate Silver, the elections expert behind the renowned US polling site, Fivethreeeight.com, has been taking a close interest in the mathematics of the UK’s uniform nation swing mechanism for converting poll shares into seats won.

He argues: “…. these forecasts are based on a questionable assumption and may understate, perhaps substantially, the magnitude of gains that might be realized by the Tories and by the LibDems. In particular, they are based on the idea of a uniform national swing, i.e., that if Labour finishes 7 points below their standing from the previous election in 2005, their share of the vote will drop by 7 points in each individual district (better known as ‘constituencies’ in the U.K.)….

…..when pressed to its extremes, the uniform swing can sometimes produce results that are manifestly illogical. If, for instance, Labour were to lose 100 percent of its vote, some versions of the uniform swing still have them keeping several seats in the Parliament, or perhaps even several dozen, depending on who that vote is distributed to… “

Nate has produced his own swingometer and produces a number of examples including the one above.

Meanwhile in the betting there’s been a sharp move to the Lib Dems on SportingIndex spread markets. It’s now at 88-91 seats – up seven since the weekend. Even at that level I still think it offers value.