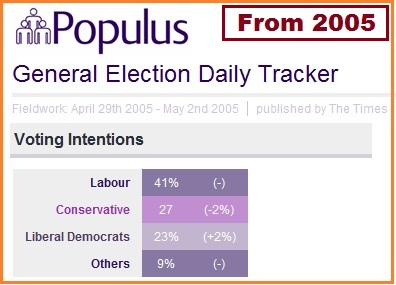 At the big pre-election polling conference at the Royal Academy in January 2010 the boss of ICM, Martin Boon, touched on the challenges for phone pollsters of carrying out surveys over bank holiday weekends and referred to what had happened before the last election.

For fieldwork for the most infamous bank holiday poll, the one reproduced above from Populus, took place over the Saturday, Sunday and Monday before the May 5 2005 general election day and came out with a 14 point Labour lead – three days later Blair’s party won with 36.2% to the Tories 33.2% and the LDs 22.7%

This was widely put down to the challenges of finding a balanced sample, particularly enough Tory supporters, during long summer weekends and it has become part of polling folklore that surveys during such periods can produce skewed results.

Last time it did not matter so so much for the result always seemed a foregone conclusion – but what could such poll findings do to the highly febrile political environment next Tuesday, only a week today?