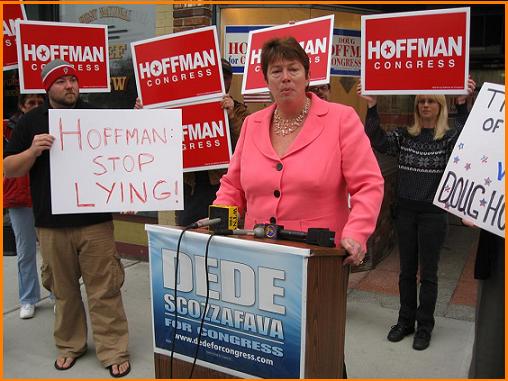 A guest article from Socrates

(On election day in the US Socrates focuses on a battle that could change US politics – MS)
While most eyes on the American political scene have been focusing on today’s gubernatorial races in Virginia and New Jersey, the contest with the biggest national implications may turn out to be the congressional one in New Yorkâ€™s 23rd district.

The bulk of New York Stateâ€™s population is located in the strongly liberal metropolis that is New York City. However, the location of the city at the gap in the Appalachians caused early settlers to claim a vast swathe of land in the name of New York. Upstate New York has maintained its rural character, and while religious evangelicalism does not play greatly here, a large chunk of the population remains fiercely pro-gun, anti-government and economically laissez-faire.

The nature of the state thus makes striking a balance between winning the partyâ€™s base in a primary and the liberal median voter in the general particularly difficult for those running for state-wide office. Unhappy with often being taken for granted, movement conservatives formed the Conservative Party of New York in the 1960s to pressure the state GOP to select candidates in agreement with their values, or face a third party challenge from its right flank, splitting its vote and letting in the Democrat. The Party has even overachieved on occasion, such as when James Buckley became a Senator in 1970.

It appears the party establishment missed the balance by a wide margin on this occasion, supporting Dede Scozzafava to the partyâ€™s nomination for a very centrist district far upstate. Scozzafava is more left than right, supporting Obamaâ€™s stimulus, gay marriage, abortion rights, and the infamous pro-union â€œcard checkâ€ legislation as well as having longstanding ties to organised labour. The inevitable Conservative Party challenge came from Doug Hoffman, who quickly won the support of the Club for Growth and a string of high-profile Republicans, including Sarah Palin. The conservatives were brutal in their attacks, including running a campaign ad from a seemingly liberal group arguing Scozzafava was the â€œchoice of progressivesâ€.

As support for the Republican eroded away, a poll showing her ten points behind both other candidates caused Scozzafava to make the shock decision to drop out, later endorsing the Democrat Bill Owens. It now seems likely the Conservative will win, with dramatic implications for the national scene.

The tea-party movement has been extremely energised since the bank bailout, Obamaâ€™s election and the stimulus, and this will only motivate them further. Conservatives are now a significant majority in the weakened GOP, and the one argument used to hold them back â€“ that the party needs moderates to win â€“ will face a significant weakening if an avidly right-wing candidate wins a congressional race in a district Obama won by five points last November. If Hoffman wins, the conservative movement will soon be looking ahead to the mid-terms next year, with the standout battle to observe the primary race between the centrist Governor of Florida, Charlie Crist, and Hispanic golden boy of the Right, Marco Rubio (remember that name â€“ he has a big future).

Much will now depend on how moderates in the party respond. Among many GOP members, moderates are often seen as traitors to the cause, and Scozzafavaâ€™s endorsement of Owens will have rammed home this sentiment. Gingrich was the biggest public endorser of the Republican, and may now face a powerful backlash in the party.

Indeed, moderate Tim Pawlenty detected the winds of change better than the former Speaker: after initially saying he could not pick a candidate as he had not â€œstudied the raceâ€, he backed Hoffman just in time. My view is that moderates in the GOP will follow Pawlentyâ€™s lead and allow the party to swing dramatically the right for the sake of their own careers. If they do not, Conservative Parties could spring up across much of the country, particularly in states with significant splits in urban and rural population. If that happens, the race in NY-23 may be looked back upon as the first event in the breaking of the USâ€™s fifth party system.

Socrates is a regular poster on PB