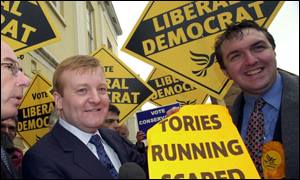 The price has gone too high

After yesterday’s Populus Poll there’s been more movement on the spread betting markets and we have now reached the stage where the price on the Lib Dems is so high that we must suspend our BUY call.

We first made this in mid June when the spread was for the party to get 54-58 seats. Since then the price has soared and soared and it has reached a point where it is no longer value for money. The latest prices are:-

Site users who took the advice in June to buy at 58 could now sell at 72 – making a very substantial profit of fourteen times their initial stake level.

Labour, meanwhile, edge upwards but they are still six seats short of the point they reached after the July 15 by-elections. The question now is whether this trend will continue or will the Tories move back a notch or two?

There could come a stage when a Tory buy becomes attractive. Andy Cooke’s new Commons seat calculator has the following seat split based on yesterday’s Populus figures:-

We think that Andy’s Lib Dem figure is on the low side and that both the Tories and Labour will be down as a result. But once the CON buy spread gets to below 200 then there might be a value bet.

The news that Paul Sykes, the millionaire backer of UKIP, won’t support the party if it puts candidates against Tory Euro sceptics gives a further boost Michael Howard. And what are we to make of Lord Saatchi’s claim that party research shows that they will win 103 Labour marginals?

This General Election is going to be very difficult to call.

WHITE HOUSE RACE POLL LATEST. Gallup which has been criticised in recent weeks for the big Bush leads that it has been rerporting has a new poll out showing the two candidates next and neck. The last Gallup poll a week ago had Bush 8% ahead.