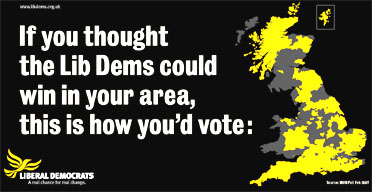 This 2001 General Election poster seeks to address a big problem for the Lib Dems – that of credibility. Electors might be attracted by the policy platform, they might give them a try at a local level as 29% did last Thursday, but at a General Election many do not believe they can win in a particular seat and see the Lib Dems as a “wasted vote”.

But performances like this year’s local elections might start to change perceptions, especially as they are showing that they can challenge Labour in its heartlands. Could a bet on the LibDem performance at the next election be a smart and profitable move?

The party is rigorous at putting its entire focus on existing and target seats and this will pay dividends. At the next election we believe that they will:-

The problems is where do you bet. Even the most bullish LibD optimists do not believe they can end up as top party even though odds of 80-90 might seem attractive. You can get 20+ on the LDs winning the second most seats but in spite of beating Labour for this position on Thursday it’s hard to make a case that this is achievable.

But you can bet on the total number of seats – and the target has got lower following the market reaction to the Euro elections. This is on the spread betting market. Currently the Lib Dem “spread” is 53-58 seats. This means that if you BUY at, say ?10 a seat and they end up with 78 seats then you would win 20 times your stake – ?200. But if they just finished with 48 seats you would lose ten times your stake – ?100.

To get to the current 58 seat BUY level the party needs to get just 6 more seats than it won at the 2001 General Election. With spread betting the more you are right the more you win. Conversely the more you are wrong the more you lose. Spread betting can be very expensive and normally we do not this form of betting because of the risks. But in this case it’s hard to envisage the party getting less than 40-45 seats even if there’s a huge Tory recovery. That’s the down-side. On the up-side the potential for 58 or more looks good.

We think that this is a good bet.

BIAS CHECK: Although I strive to be objective when I make a call users should be aware that I am a Lib Dem and ran for Parliament in 1992. I supported Simon Hughes for the Lib Dem leadership – Mike Smithson