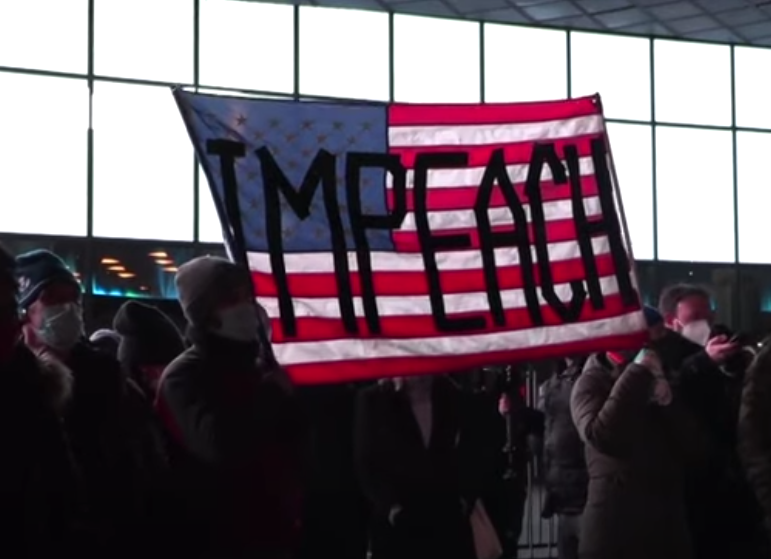 With rallies and demonstrations, like the one in New York above, taking place in many US cities to demand that the president be impeached there are increasing reports that an attempt might be made during Trump’s final 12 days.

The reason why there’s so much anger that was there for all to see on Wednesday as Trump supporters invaded the Capitol building. This cannot be allowed to go unpunished if a commitment to democratic values is to be restored.

Taegan Goddard who runs the excellent Politicalwire had this observation on why GOP Senators might back the move that would require a two-thirds Senate majority.

“Assuming the vote takes place as soon as “mid-next week,” as Rep. Katherine Clark (D-MA) suggested, the U.S. Senate would have to convene a trial immediately. However, Trump’s first impeachment trial lasted four weeks before delivering a verdict. Trump only has 12 days left in his presidency. That suggests the goal of impeaching Trump likely may not be his actual removal from office and could instead be targeted on preventing him from holding federal office in the future. That’s could be appealing to enough Senate Republicans — some of whom are eyeing presidential bids in 2024 and would prefer he doesn’t run — to get the two-thirds necessary for conviction. That would require 17 Republicans to join every Democrats once Raphael Warnock and Jon Ossoff are sworn in.“

Clearly everything is very fluid but it is hard to see no action being taken against the President.

Punters on the Smarkets exchange now rate it as a 71% chance that Trump will be impeached. Note the rules of the market:

This market concerns whether the US House of Representatives will vote, by simple majority, to approve or pass any articles of impeachment on President Donald Trump between 7 January 2021 and the end of his presidential term on 20 January 2021. This market is not concerned with any votes that may take place in the Senate, nor is it concerned with the 25th Amendment. If Donald Trump is removed from office via the 25th Amendment, this will have no bearing on the outcome of the market. If he is removed from office via the 25th Amendment before he is impeached, this market will settle for no.