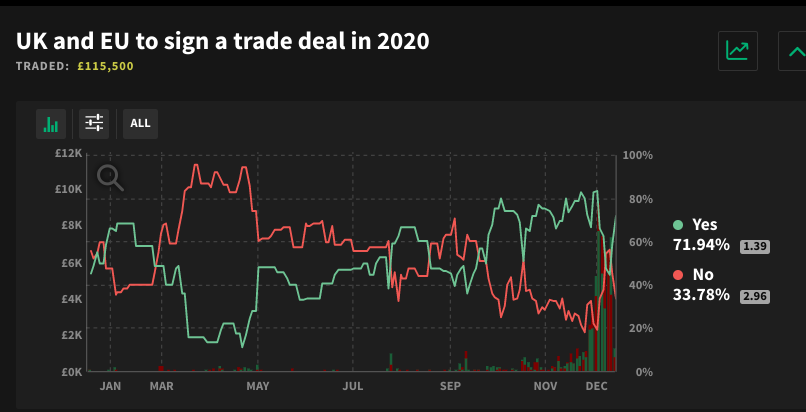 While all eyes in the US are focused on the Electoral College vote count which is taking place today in Europe there’ve been positive indications from the talks in Brussels with the EU and UK agreeing to keep talks on a trade agreement going.

There are still differences but there does appear to be a desire on both sides to find an agreement and this is what has driven the changes on Smarkets exchange betting market as in their chart above.

Time is of course running out and any agreement would have to be ratified by the EU and of the House of Commons.

I have long taken the view that there would be an agreement simply because the alternative presents so many problems for both the EU and even more so for the UK. Reports of the no deal like the practical issues the impact on UK aviation I am sure are on Boris’s mind.

Quite what the initial deadline is it hard to say and you got a feeling that this could go right to The Wire and Parliament having to be recalled between Christmas and the new year.

Johnson has always declared that there will be no extension to the December 31st deadline but then he has made similar assertions before and has ended being flexible.