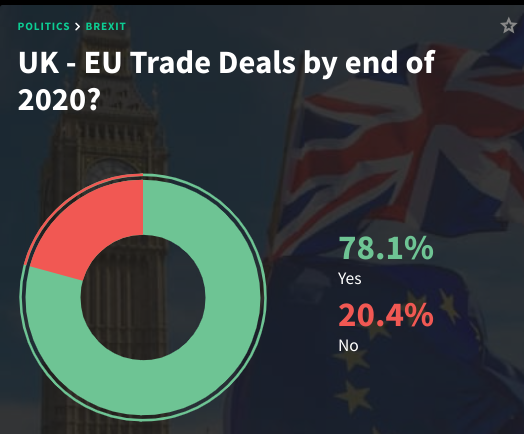 Of all the big political events coming up in the run up to Christmas and beyond the biggest for the UK surely is whether there will there be a deal with the EU. If agreement is not reached by the end of the month then the UK will be leaving without a deal and all the associated challenges that creates and worries about the supply chain of things that we rely on that come from Europe.

But if the Smarkets market is a good guide punters appear pretty certain that in the end Johnson will agree a deal. But he’s got big problems because his party remains as totally split on Brexit as it has been for many years on the manner of the departure. This is something that MPs have very strong opinions about.

Starmer has indicated that LAB would back what Johnson agrees to if indeed there is a deal so that relieves that some of the Commons pressure. It does, however expose the issue of the divide within the Tory Party.

This is not a market I have actually bet upon because I don’t think the odds are attractive either way.

The thing that I found most interesting in the past few days is how other countries within the EU are worried that Barnier night concede too much.

The biggest issues are well known – UK fishing rights and whether in its post EU existence the UK will follow the sort of industrial support regime that exists within the EU..

My guess is that some wording will be found to deal with each of these huge problems but we cannot be absolutely certain.