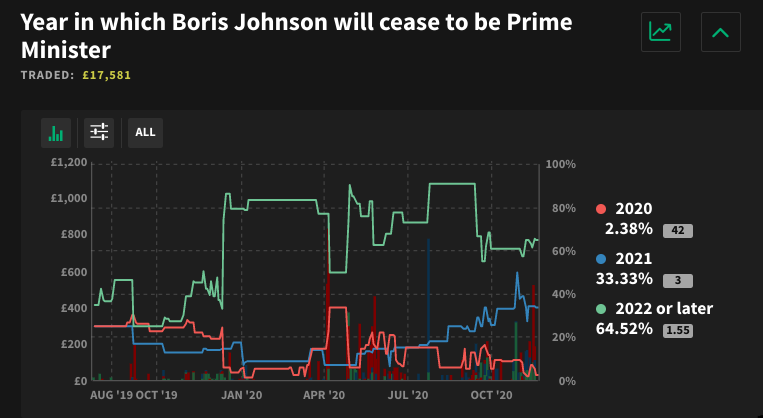 Betting chart from the Smarkets exchange

Ever since the father in law of Dominic Cummings said in the summer that Boris would be out with 6 months there has been speculation that the prime minister might be ready to go once Brexit is all sorted in the New Year. Certainly he hasn’t quite looked as sharp since he contracted COVID and he has seen a colossal drop in his leader ratings.

Back in April YouGov had him with a net plus 40% to their “well/badly”question. The latest poll from the firm where this question was asked he was on a net minus 25%. So his position has fallen an extraordinary 65 points in seven months.

He is doing better against Starmer at PMQs but he’s still struggling and we’ll have to wait and see how the Number 10 departures at the end of last week are going to play out.

An awful lot for him is riding on what happens with Brexit. My guess is that with lockdown bandit, Cummings, out of the way there is a greater chance of a deal.

There are two ways that he could go – either voluntarily or as a result of a confidence vote amongst Tory MPs. I cannot see either being imminent.