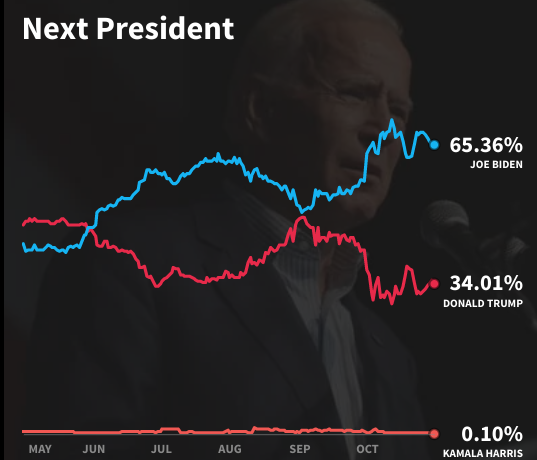 On the biggest political betting market of all time, as the Smarkets chart shows, Biden is rated as a 65% chance which given the polling and the other election predictors looks amazingly generous.

The latest forecast from the Economist has Biden at 95% while Nate Silver’s site has the former VP on 89%. His national polling average has Biden on 52% with Trump on 43.2%.

The state polling is in the main looked good for Biden with Florida, where there has been intense activity and 7.4m having already voted, he’s a 2.2% poll lead over Trump. If Trump fails to take Florida then he has to win two of the three most marginal states.

Yet in spite of all of this UK punters remain remarkably optimistic about Trump and my guess now is that this will go on till election night. Memories of Brexit and WH2016 run very deep and surely influence this thinking.

One of the stats I follow closely is how many of the 90,386,122  with postal ballots have actually been recorded as having voted. The current total is 53,663,285 so still a lot of postal ballots in the system.